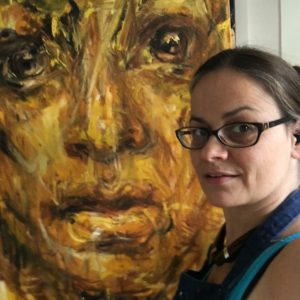 Judy Volkmann grew up in Fall River, Massachusetts and earned her Bachelor of Fine Arts degrees in Painting and Art Education from the University of Massachusetts, Dartmouth. She has received numerous awards, including the Ellen Batell Stoeckel Fellowship to study at Yale Summer School of Music and Art in Norfolk, CT. It was during that summer, inspired by the abstract painters there, when she began to explore abstraction in her figurative work.

For over thirty years, Volkmann’s art has focused mainly on the human figure and expressionism. She enjoys painting commissioned portraits for her clients, and has had her work displayed in galleries throughout the Northeastern region of the U. S. Her art is in private collections in Massachusetts, New York, Rhode Island, Vermont, Virginia, Maine, Pennsylvania, Illinois, Florida, Kansas, Idaho, New Mexico, California and Colorado.

“I think that’s why I was struck by Judy Volkmann’s art and in particular, the series she titled Faces of Humanity. In this ten-part series, Judy uses a single face to capture emotion and what it means to be human. I was especially moved by the stark blacks and whites of “Face Value,” shown here, because it seems to issue some of the same challenges we make to our writers: “Dig deep. Go beneath the surface so the reader can see what you’re seeing and feel what you’re feeling.”
– Karna Converse, Literary Mama, blog

Click on the following link to read more: http://www.literarymama.com/blog/archives/2017/09/from-the-editor-september-2017.htmly

“Confrontational, emotive, sculptural, explosive – these words accurately describe the paintings of Judy Volkmann. Larger than life, bleeding with color, the portraits depict raw emotions and are not meant to represent specific people.
That these powerhouse paintings come from a petite and optimistic brown-haired 48-year old woman who lives off of Hope Street in Providence takes some explanation.”
~ Paula Martiesian, BankRI Gallery

Click on the following link to read more: Judy Volkmann At BankRI Turks Head GalleryPosted on March 2, 2016 by gallerynightguy